Dalton & Associates is located in a historic Quaker Meetinghouse here in Wilmington Delaware. The building recently celebrated it’s centennial, being originally built in 1915. Below, our office has put together a brief history of the building.

The building was certainly a-typical for Meeting Houses then and now. Meeting Houses are typically made from wood or brick and are almost invariably in a box/barn shape. This new Meeting House proposed by Smedely was to be made out of stone. Large Doric columns, capped with large Romanesque triangles, flank each of two main entrances. Inside, Smedely's design called for a barrel vault roof and a fireplace.

Learn about our Attorneys

The most exceptional interior feature is undoubtedly the sixteen-foot wide raised panel counterweighted raise-up door. This door was used during the Quaker Meetings for Worship. The door was brought down during these meetings, splitting the main first floor room in two. On one side the men worshiped, on the other the women. The door was raised for Quaker Monthly Business Meetings. The Wilmington Meeting of Orthodox Quakers listened for the 'inner voice' separately but when it came to financial decisions, the issuing of statements and letters from the meeting as a whole, or day to day decisions related to the maintenance and up-keep of their quite unorthodox, orthodox meeting house; everyone had equal voice.

On May Eighth 1913 the members of Wilmington Monthly Meeting of Orthodox Friends, who worshiped in a dilapidated wooden building on Ninth and Tatnall streets in Wilmington, Delaware, to purchase a lot at Tenth and Harrison streets formed a committee where a new meeting house could be built. George A. Rhoads, who was also one of the clerks of the meeting, chaired the committee designated to purchase the lot.

The empty lot where the building still stands was purchased for $1,675. A Quaker architect, Walter Smedely drew the plans for the building and the A.S. Reed & Brother Company was contracted to build the stone meeting house for the price of $10,372 materials, labor, included.

After minor delays in construction, the building was completed and the Wilmington Meeting of Orthodox Friends held their first meeting for worship in their new building on September First 1915.

The scope of influence held by Quakers throughout the Delaware Valley from the time the first European settlers arrived through the Vietnam War is hard to quantify. Quakers spearheaded the majority of social initiatives relating to the women's suffrage and civil rights movements in the area. As Pacifists, Quakers shaped the non-violence dialog for over a hundred years in this Country. The Wilmington Meeting of Orthodox Friends was no different. Talks were held throughout both World Wars on how to apply principles of non-violence into daily life. Letters that at once protested the militaristic path the country had taken, and at the same time exalted the virtues of national pride were sent to all levels of local and Federal government. Numerous members of the meeting were involved in dispensing aid to anyone in Europe who needed it regardless of religious or political affiliation through the then-recently-established AFSC (American Friends Service Committee). 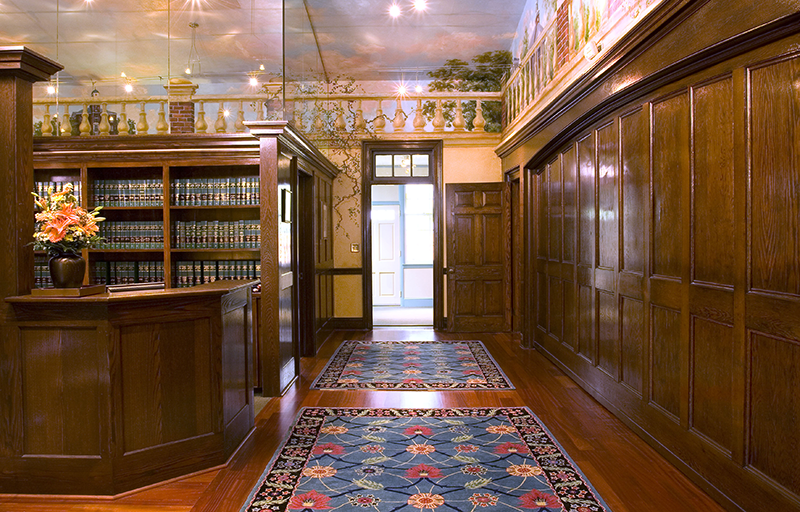 The first of several weddings were held in the building on June Fifteenth, 1917. It was the wedding of Robert H. Maris to Katherine E. Spear. The two would remain very active in the meeting for the rest of their lives, as Robert Maris' family had before him.

Among the other prominent Wilmington Quakers that worshiped at Tenth and Harrison streets were: Edith C. Rhoads, Horace J. and Robert R. Tatnall, George A. Rhoads, Irving J. Cox, B. and Catherine B. Swift.

After the Second World War, the schism that had segmented the Quaker faith subsided. Wilmington Meeting of Orthodox Friends decided to merge with the Wilmington Meeting of Hixite Friends who worshiped in the much larger Fourth and West Meeting House. Noted in the minutes of the final Quaker meeting held at Tenth and Harrison Streets, one of the original members of the meeting, Horace J. Tatnall said that the present status is preferable to change," he went on to say that he "could not conscientiously join in such a change." Following this objection the final minute is noted.

After discussion it was agreed that the time had come to proceed with the formation of United Monthly Meeting, although loving sympathy was felt for any who may conscientiously object to such a step.

Dalton & Associates purchased the building in 2001 and have completely renovated it to reflect the unique quality of both the building and our firm. With a focus on preserving the historical integrity and uniqueness of the building, we again began construction in November of 2012 on a new 2,000 square foot wing adjacent to the existing building. Construction was completed in May of 2014, providing a beautiful new space that houses three new offices, a conference room, and a vaulted barrel ceiling mirroring the original Meeting House architecture over the lobby.